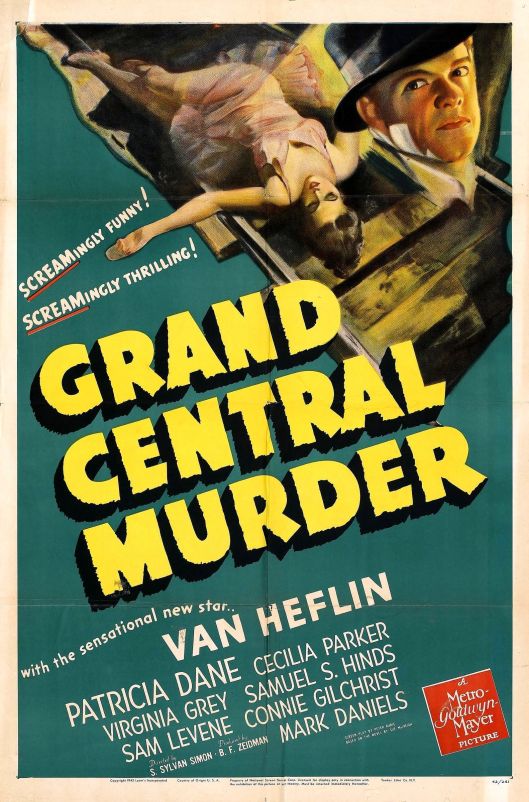 Back in the Thirties and Forties, many a low budget murder mystery was adapted from a literary source, and Grand Central Murder is no exception. Based on Sue McVeigh’s 1939 novel of the same name, the movie is a sprightly, fun-packed whodunnit that zips along at a steady clip as it builds up a strong case for each suspect in the murder of actress Mida King (Dane). Of course, there’s one suspect who seems more likely to have committed the deed than all the rest, and here it’s convicted killer Turk (McNally). On his way to a retrial, Turk escapes from his police escort while at Grand Central station, and instead of finding somewhere to hide out, he calls Mida and threatens to kill her. Later, Mida is found dead in the private railroad car she has on a siding at Grand Central. Could Turk really be the killer, or could it someone else with a grudge against her?

With Mida murdered, the stage is set for an investigation launched by Inspector Gunther (Levene), but one that will be hampered and helped by private investigator “Rocky” Custer (Heflin), who Turk has hired to prove his innocence. Custer persuades Turk to give himself up, while Gunther assembles several of Mida’s friends and colleagues – and other interested parties – in an effort to find out what happened between Mida getting the call from Turk, and being found dead in her sidecar. Among the suspects are her supposedly psychic stepfather Ramon (Bohnen), her maid, Pearl (Gilchrist), her producer, Frankie (Conway), and her rich fiancé, David (Daniels). As th investigation covers more and more ground, even Custer and his wife and business partner Sue (Grey) have the finger of suspicion pointed at them.

Part of the fun here is the way that the story is told via flashbacks, as each new suspect in Gunther’s firing line explains their previous interaction with Mida, and defends any suggestion that they had a motive for killing her (even though pretty much everyone does). There are plenty of red herrings fed to the audience along the way, and though some of them might seem obvious to modern day audiences, there’s no doubting the enthusiasm with which the cast set them up and then let them loose. What may prove more contentious is the idea that a stage actress has a private railroad car at her disposal, but this is a variation on the old “locked room” mystery, with the cause of Mida’s death baffling both Gunther and the coroner.

Of course, it’s Custer who does the real sleuthing (never let it be said that a cop in a Forties mystery thriller was ever brighter than the amateur detective who eventually solves the case). Heflin invests Custer with a wry amusement at everything going on around him, while his counterpart/nemesis, Gunther (expertly played by Levene, who was the original Nathan Detroit in Guys and Dolls on Broadway), stumbles on with grim determination even as he gets it wrong at every turn. Dane is good as the victim with a chequered past, while there’s equally solid support from Gilchrist and Conway. Simon, a somewhat journeyman director for most of his career, is on better form than usual, and the movie integrates its flashbacks into the narrative in a way that doesn’t make them confusing or lets them slow things down. The solution when it arrives is quite clever, though eagle-eyed viewers will have worked out the killer’s identity long before then, if not how they (almost) got away with it.

Rating: 7/10 – well-paced and with an underlying sense of humour that helps keep an otherwise dry storyline from becoming banal, Grand Central Murder is pleasant, diverting stuff that keeps the audience guessing, but which doesn’t try to be too tricky; in some ways, a minor classic that doesn’t try too hard to make it completely convincing, it’s a movie that is smart, occasionally irreverent, and very entertaining. 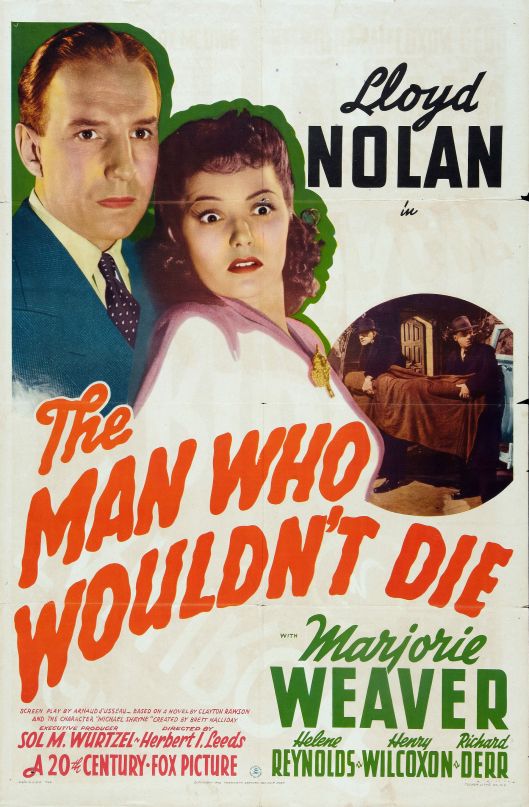 Three weeks before MGM released Grand Central Murder, 20th Century Fox released this, the fifth in an eventual series of seven Michael Shayne movies starring Lloyd Nolan as a wisecracking private eye. It too was based on a novel, this time No Coffin for the Corpse by Clayton Rawson, but Rawson’s tale wasn’t a Michael Shayne adventure, rather it was one concerning a sleuth (and yes, he’s an amateur) called The Great Merlini. Merlini is reduced to a minor role here, while Brett Halliday’s creation takes centre stage in helping old flame Catherine Wolff (Weaver) solve a mystery involving a vanished corpse, murder, and strange experiments at her father’s home. To this end, Shayne (Nolan) pretends to be Roger Blake, the man Catherine has recently married, and together they investigate shootings in the middle of the night, and much more besides.

The Michael Shayne movies all contained a good leavening of humour, and The Man Who Wouldn’t Die is no exception, with Nolan racking up wisecracks and genuine laughs in such a dry, subversive manner that you don’t want him to stop (or have the script run out of steam). Circumstances allow him to play funny with a skeleton, and poke fun at the rest of the characters, and Nolan displays a deft approach towards the material that allows him to make the most of each scene he’s in, whether it’s comedic or dramatic. As is usually the case, the cast are all experienced hands at this sort of palaver, and it’s great to see ex-silent comedian Bevan as the mildly indignant butler, Phillips. 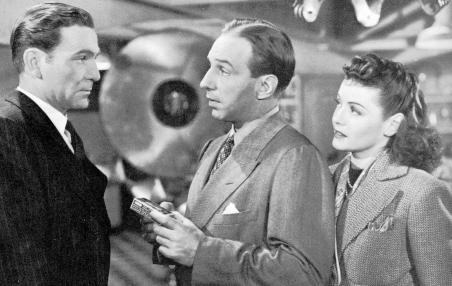 The mystery elements aren’t handled quite as well as they should be, mainly because the script opts to make them unnecessarily complicated, with a sub-plot involving basement-set experiments that have a distinctive sci-fi/horror vibe to them a case in point. These help pad out the modest running time, but don’t elevate the material in any way, leaving the narrative feeling a little stretched beyond its credibility. But however you look at it, this is a fun movie that plays fast and loose with its characters’ motivations, throws in a couple of fright moments to spice things up, and relies heavily on its cast’s charm and commitment in order to make its convoluted narrative more enjoyable. Nolan is an appealing screen presence, as is Weaver as this movie’s version of a dumb blonde, while there’s fine support from the likes of Harvey (bluff and cranky as ever as Catherine’s father), and Howland as the bumbling Chief of Police Jonathan Meek.

This is at heart an old dark house mystery, with much of the action taking place at night and in shadowy patches of the screen that prove atmospheric and somewhat creepy. The identity of the vanished corpse is not one you’d be able to predict – mostly because of its relation to one of the main characters, which isn’t obvious – while the identity of that main character (and secondary villain) is slightly easier to work out. In the director’s chair, Leeds shows off an occasional visual flourish and maintains an easy pace throughout, without taking it at all seriously. Leeds seems to be having as much fun as Nolan is, and the whole thing often teeters on the point of complete absurdity before dragging itself back at the last moment. But nevertheless, it’s a movie that sets out to entertain first and foremost, and thanks to Nolan’s previous experience in the role, does so regularly and comfortably.

Rating: 6/10 – some flaws in the script aside, The Man Who Wouldn’t Die is a prime example of a franchise entry that doesn’t show signs of the series’ running out of steam any time soon; solid and reliable in terms of its narrative, and quip heavy, it’s another example of a B-movie that has more to offer than it seems at first glance.