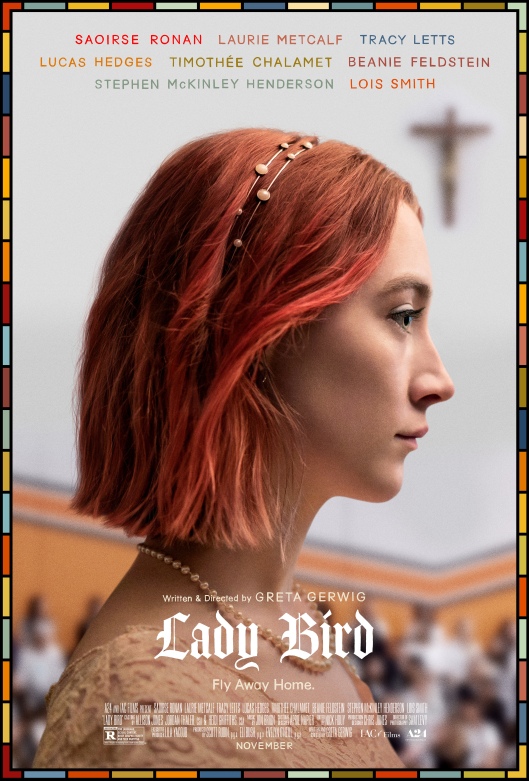 Warm and inviting, actress Greta Gerwig’s debut as a writer/director is a coming of age tale that involves Christine McPherson (Ronan), a seventeen year old high schooler who lives in Sacramento with her parents, Marion (Metcalf) and Larry (Letts), her adopted older brother Miguel (Rodrigues) and his girlfriend, Shelly (Scott), and who prefers to be known by her given name (as in given to her by herself) of Lady Bird. Lady Bird is a senior student who is looking to swap what she views as the culturally barren West Coast for the more eclectic and intellectual East Coast when she graduates and heads off to college. Currently attending a Catholic high school, she feels and acts like an outsider, and aside from having one friend, Julie (Feldstein), doesn’t do much to combat this. When she and Julie decide to audition for the upcoming school musical though, she meets Danny (Hedges), and they begin dating.

But while she navigates the uncharted waters of her first romantic relationship, Lady Bird has other problems to deal with. Her father is in danger of losing his job, and increasing financial difficulties have left the family living – literally – on the wrong side of the tracks. Also, Lady Bird’s relationship with her mother is an adversarial one, with the two of them constantly arguing and battling against each other. Marion is painfully honest about her belief in Lady Bird’s ability to get into a good college, and rarely ever compliments her. Her father is more supportive, and between them, he and Lady Bird endeavour to get her on to a college Wait List. While she waits for a response, Lady Bird’s relationship with Danny stalls due to an unexpected development, and she drops Julie in favour of Jenna (Rush), a more popular girl in school. At the same time she meets Kyle (Chalamet), who’s a musician in a band. But Lady Bird soon finds that dropping one small set of friends for another doesn’t solve any of her self-perceived problems, and her fractious home life doesn’t improve either. In fact, events lead to it being quite the opposite…

The idea of actors or actresses deciding to step behind the camera is far from unusual, but writing and directing as a first choice, and on the first occasion, is a little rarer. It’s a tribute to Greta Gerwig’s efforts that Lady Bird is not only an accomplished first feature, but a movie that will bear up under repeated viewings. Coming of age movies are ten a penny these days, and the highs and lows of being a teenager have been the subject of so many movies that you could be forgiven for wondering if there is anything new to be said. And while this does remain the case, what Gerwig does that makes her movie so effective, and so good, is write convincing dialogue. There’s not one line that feels false or contrived or sounds clichéd, and with this so ably taken care of, the cast have no problem in sounding like real people, and the various interactions their characters have all have an air of authenticity, as if Gerwig has eavesdropped on actual conversations and recorded them verbatim. This also gives the movie a rhythm and a flow that allows the viewer to be drawn along in the characters’ wake, something that adds immeasurably to the enjoyment the movie provides. And with that enjoyment comes a hopefulness that everything will eventually work out well for everyone concerned.

Lady Bird herself is a terrific character, challenging and challenged at almost every turn, and behaving in contradictory fashion throughout, just as a regular teenager would be who was trying to work out their place in the world. She wants to be her own individual, independent and assured despite having only limited experience of relationships and the wider world – everything happening with her father comes as a surprise to her – and trying to do her best as long as she benefits most. Gerwig focuses on Lady Bird’s selfish behaviour with a precision that if it isn’t autobiographical then it means that she’s very, very observant. There are moments where sympathy for the character is deliberately withdrawn by Gerwig, but there are also moments that follow on where Lady Bird shows more self-awareness than before, and sympathy is restored accordingly. It’s all played out with great skill and directorial acumen, and Gerwig accurately captures the confusion and longing that goes with being seventeen and wanting to be loved by family, friends, and/or the opposite sex.

She’s aided by a tremendously assured performance from Ronan, an actress who seems to be getting better and better with every role. Ronan brings a versatility and an understanding of the character that is impressive for the consistency that she achieves in maintaining Lady Bird’s obdurate character. It’s an appealing, generous performance and has a sincerity about it that allows the viewer to overlook much of Lady Bird’s poor behaviour. As Lady Bird’s mother, Metcalf is also on tremendous form, channelling the pain and frustration Marion feels at where Life has brought her, and the additional pain that comes of finding herself unable to do anything about the emotional discord between herself and her daughter (though the reason why is perfectly encapsulated in a single line of dialogue). In support, Letts is tender and more approachable, Hedges is a flawed Prince Charming, Chalamet is the pretentious rebound boyfriend, and Feldstein shines as the best friend who’s kicked to the kerb out of social expediency.

For the most part, Lady Bird is a keenly observed drama, but Gerwig is able to infuse her tale with an abundance of humour that acts as a necessary counterpoint to the emotional trials and tribulations that her heroine faces. The humour is varied from scene to scene, but like the majority of Gerwig’s script is only included when it suits or supports the material; there are no easy laughs here. Gerwig also shows that she has a keen sense of the spaces that her characters inhabit. Lady Bird and Marion are often shot in close proximity to each other so as to highlight the closeness of their relationship, while her other relationships – the ones that aren’t so emotionally acute – are allowed greater room in which to play out. DoP Sam Levy does a terrific job in allowing Sacramento (with which Lady Bird has a love-hate relationship) to become a secondary character all its own, while Nick Huoy’s editing is perfectly in sync with the tempo of Gerwig’s screenplay and directing style. As first features go, Gerwig has made a formidable debut. If she has any other ideas for a movie, then let’s hope we get to see them real soon, because on this evidence, her career as an actress doesn’t have to be her only one.

Rating: 9/10 – modest in scope and presentation, but perfectly realised for all that, Lady Bird is a movie with a big heart, grander ambitions than expected, and the courage to attain them all; in making this movie so completely irresistible, Gerwig has put her indie colleagues on notice: there’s a new movie maker in town and worst of all, she knows exactly what she’s doing.