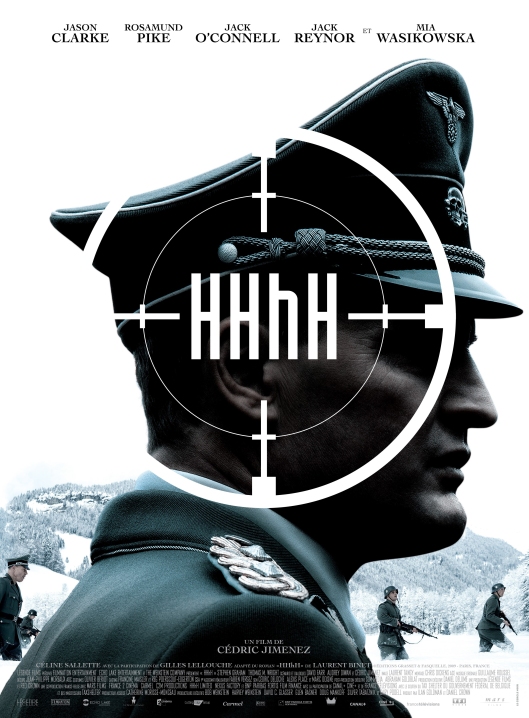 aka Killing Heydrich; The Man With the Iron Heart

Let’s get this out of the way right from the start: HHhH is an odd movie. In fact, it’s very odd. Not because of the title, which is an acronym for Himmlers Hirn heißt Heydrich (Himmler’s brain is called Heydrich, a quip you wouldn’t dare repeat back then), and not because you have to wade through a long list of actors before you find someone whose first language is actually German or Czechoslovakian. No, what makes the movie so odd is that, for a drama based around the assassination of Reinhard Heydrich (Clarke), keen violinist and one of the main architects of the Final Solution, it lacks ambition and drive, and often moves from scene to scene as if seeking the right direction in which to move forward. It also lacks focus, telling us much about Heydrich’s early life in its first twenty minutes (including his love of fencing, and his dishonourable discharge from the German Navy), but then failing to link it all to anything that happens once he’s fully committed to being a Nazi.

Like a lot of members of the Nazi Party, Heydrich went from being something of a nobody to somebody wielding quite a lot of power in a very short space of time, and the movie recognises this. However, thanks to the vagaries of the script, and Clarke’s gloomy demeanour throughout, Heydrich remains a sadistic bully boy in adult’s clothing – and just that. No one is looking for the movie to redeem Heydrich in some way (though that would make it more interesting), but for all its attempts at trying to shine a spotlight on his pre-Nazi activities, they’re all left abandoned as the movie progresses. Instead we see Heydrich’s rise to prominence through the patronage of, first, his wife, Lina von Osten (Pike playing Lady Macbeth as if her career depends upon it), and then, second, Heinrich Himmler (Graham playing Hitler’s right hand man as the uncle you do visit). He does some expectedly nasty things, behaves unconscionably whenever possible, and then his story, with over an hour of the movie to go, takes a back seat to Operation Anthropoid. 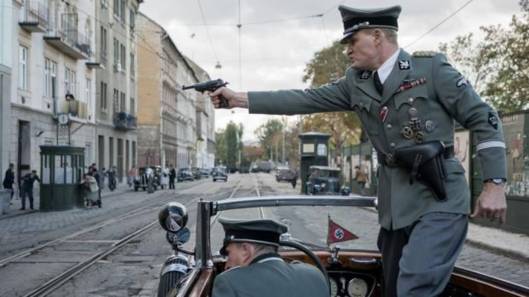 By changing its focus nearly halfway through, Jimenez’s movie only narrowly avoids feeling schizophrenic. As we’re introduced to Jan Kubiš (O’Connell) and Jozef Gabčík (Reynor), the two men chosen to head up the assassination attempt, we also get to meet a whole roster of new characters that we don’t have time to get to know or care about. And once Heydrich is out of the way, the terrible reprisals carried out by the Nazis are represented by the razing of Lidice (which actually happened), but in such a brusque way that it makes it obvious that HHhH wants to move on quickly to address the fate of Kubiš and Gabčík and their compatriots – which goes on for far too long and features the kind of gung-ho heroics that only a movie would feel was appropriate. Add the fact that the script – by Jiminez, Audrey Diwan and David Farr from Laurent Binet’s novel – is represented by some of the blandest, most depressing cinematography seen in recent years, and you have a movie that is tonally awkward, flatly directed, and which flirts in earnest with having nothing meaningful to say.

Rating: 5/10 – clunky and dour, and only sporadically engaging, HHhH tells its story as if it was being forced to – and the whole process is painful; a missed opportunity would be putting it mildly, but the movie’s very oddness allows for a certain fascination to develop as the movie unfolds, making it watchable if you don’t expect too much from it.