For Michael (Duplass), the news is very bad indeed: he has terminal cancer. For his neighbour Andy (Romano), the news is also very bad indeed: he will lose his only friend in the world. The two live at the same apartment building, and have developed a close bond, spending their evenings and weekends together, watching kung fu movies and eating pizza, and playing a game of their own invention called Paddleton. When Michael decides that he doesn’t want to reach the stage in his illness where he’ll be connected to tubes and wires and spending more time in hospital than not, he tells Andy that he wants to kill himself before he reaches that point. Having arranged through his oncologist to pick up medication that will allow him to do this, Michael and Andy set off on a road trip to collect it. Along the way, Michael becomes aware of just how much his impending demise is affecting Andy, and encounters with a pharmacist (Hardison) and a motel owner (Taylor) reinforce the sense of loss that Andy is beginning to feel. When they return home, it remains to be seen if Michael will carry out his plan, and if he does, whether Andy will help him…

Made under the banner of the Duplass brothers’ production company, Paddleton rolls out its stall in the very first scene. With Michael calmly receiving the news that he has a mass and it should be checked out by an oncologist, it’s left to Andy to react in the way that you’d expect most people to react: he gets flustered, questions what Michael has been told, and looks for a more positive response from the doctor they’re speaking to. There’s comedy and pathos here alongside the obvious drama of the situation, and these three elements are the mainstay of a movie that takes a subtle, nuanced approach to the idea of euthanasia, while also exploring the strength of a friendship that has never been tested by something so serious – and life changing – before now. It’s a measure of the way in which the script (by Lehmann and Duplass) tackles these issues that the movie remains affecting and emotional all the way through, and without coming across as melodramatic or insincere, or worst of all, patronising. With the friendship between its two central characters having been so carefully plotted and constructed, Paddleton is a bromance that has unexpected depth and honesty. 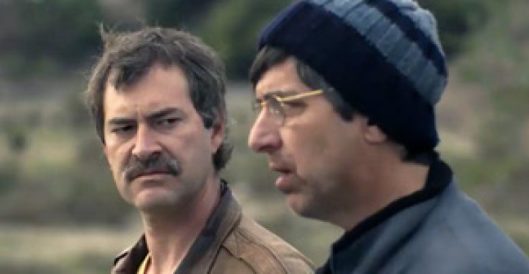 This is thanks to both the screenplay, and the combined efforts of Duplass and Romano. Duplass is a quiet, solid presence, imbuing Michael with a sombre nobility, and entirely convincing as a man who wants to die on his own terms. Romano is something of a revelation, taking Andy’s many insecurities and inhibitions and making the character a fully rounded individual whose lack of social skills hides a greater capacity for love and affection than even he may be aware of. Romano’s performance is affecting and full of little touches that illustrate just how much he’s already grieving even though Michael hasn’t gone through with his plan yet. And yet there are small moments of hope dotted here and there for both characters, and though the movie has no intention of proving itself untrue to both the characters or the narrative, it’s these small moments that add detail and poignant circumspection to a story that is both heartfelt and intelligently handled. Lehmann builds on the promise shown in Blue Jay and Asperger’s Are Us (both 2016), and ensures that the more dramatic elements don’t overshadow the comedy – which is both bittersweet and meaningful – and vice versa. The end result is a movie that tells its simple story with a great deal of subdued yet effective panache, and without short changing either its characters or its audience.

Rating: 8/10 – low-key but brimming with confidence in the material and the downbeat nature of its themes, Paddleton is the kind of low budget indie movie that comes along every now and again and reminds us that there are still valid stories to be told about the human condition; touching without being sentimental, and bold in not pandering to any unnecessary romanticism about Michael’s decision, this is a well crafted and beautifully acted movie that shows just how complex and rewarding brotherly love can be.

Will Traynor (Claflin) is young, smart, successful, and thanks to an accident involving a motorbike, a quadriplegic. Louisa Clark (Clarke) is also young, but while she’s smart enough and able bodied, she’s reached her mid-twenties without having travelled or worked anywhere except in the local cafe. Will is financially well off and can afford the best care available; he also has doting parents (McTeer, Dance) who don’t want him to limit himself because of his disability. Louisa, nicknamed Lou by everyone who knows her, lacks ambition, and has a fitness-obsessed boyfriend, Patrick (Lewis), who treats her like a member of his (non-existent) fan club. Will wants to die, and has agreed to give his parents six months before he does. Lou wants a life but doesn’t know how to go about claiming one.

Lou loses her job at the cafe. Will needs a live-in carer. Lou applies for the job despite having no previous experience. Will’s mother hires her anyway, surmising that Lou’s madcap personality can bring Will out of his bitter moods. At first it doesn’t work. But as time goes on, Lou and Will establish a friendship that sees both of them venture out of their shells, and begin to engage/re-engage with the wider world. Lou introduces Will to her family. They go on outings together. Patrick suspects that Lou has stronger feelings for Will than she’ll readily admit. Patrick is right. After Will suffers a recurring bout of pneumonia, Lou persuades Will to take a holiday to Mauritius. She goes with him, as does Will’s personal care-giver, Nathan (Peacocke). The night before they’re due to return, Lou tells Will she loves him. But Will has devastating news for her… 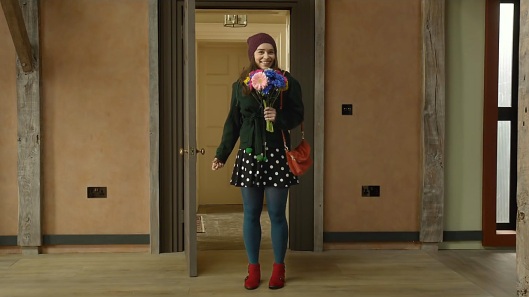 On the surface, Me Before You – adapted by Jojo Moyes from her novel of the same name – is a brisk romantic drama with comedic elements that is designed to tug at the heartstrings of viewers susceptible to this kind of thing, and leave them blubbing into their Kleenex by the movie’s end. And on a superficial level, the movie does this very well indeed, and is quite charming as it does so. But there’s a lot more going on in Me Before You than meets the eye; a lot more. The only question to ask is: how much of it is deliberate?

First there’s Lou, a bubbly, positive bundle of energy who pulls faces a lot when she’s nervous, and whose eyebrows appear to have (literally) wandered in from a documentary on endangered insects. She also has the worst fashion sense this side of anyone in either Zoolander movie. But she’s cute and she’s lovable, and she’s like an adorable puppy; she just wants to be liked sooooo much. But it’s not until she rounds on Will for being rude to her (for the umpteenth time) that their relationship truly begins. He stops behaving like an arse, she starts to like him. And romance begins to make itself felt, even if it’s only one-sided at first.

And secondly, there’s Will, a once-energetic, care-free young man who had the world at his feet, the admiration of his friends and colleagues, and a beautiful girlfriend (Kirby). He loses all that, and more besides. He loses the will to live, and he shuts himself away. He does his best to alienate the people around him, while refusing to show anyone just how much pain he’s in. When Lou chastises him for his behaviour it makes him rethink his approach, and the way he feels.

But that’s the wicked attitude that sits at the heart of the movie. Moyes, aided by director Sharrock and the twin efforts of Clarke and Claflin, brings these two lonely characters together and gives them an unrealistic chance at happiness. We’re told at the beginning that Will’s condition is irreversible, and we’re told his intentions soon after. And through Lou’s efforts at bringing Will out of his shell, the audience is persuaded to believe that there is hope – for Will, for Lou, for both of them as a couple. But it’s a false hope, and one that the movie focuses on for a large part of its running time. As each shared experience brings Lou and Will closer and closer to each other, the audience is encouraged to believe that there will be a glorious Happy Ever After.

But anyone who has been paying attention will know that true love doesn’t conquer all, and that in the real world, fairy tale romances have a nasty habit of folding under the pressure of expectations (it doesn’t help that Moyes has also written a sequel, helpfully entitled Me After You). And so it proves here, as the kind of wonderful romance that only happens in the movies is derailed by narrative considerations it cannot avoid. It’s like a kick in the teeth, and the average viewer could be forgiven for thinking that the movie has stopped being a positive message about overcoming the restrictions of a truncated lifestyle, and has become a glowing advert for euthanasia.

But strangely, such narrative concerns do little to hinder the movie’s charm and likeability. Despite the darkness at the heart of the story, Lou and Will’s burgeoning love affair is one that tugs at the heartstrings and proves impossible not to root for. Moyes is clever enough to make their relationship credible enough amid all of Lou’s self-doubt and Will’s hatred of his condition, and she and first-time director Sharrock are aided immensely by the performances of Clarke and Claflin. Both actors have the measure of both their characters and the drama that underlies the surface fluffiness of their romance. Clarke’s surprisingly malleable features express joy and sadness and confusion and worry with undeniable charm, while Claflin expresses more with a look than some actors manage with their whole body and a lengthy monologue.

Me Before You isn’t a perfect rom-dram – or rom-com – though it has the best elements of both, and it sometimes goes out of its way to paint an idealised picture of Will’s condition that is at odds with its own narrative agenda, but for all that it’s a warm-hearted, often very funny movie that is engaging, affecting and hugely enjoyable despite the last-minute change into movie-of-the-week melodramatics. And if it all looks a little too sleek and shiny in terms of its overall look, then chalk that one up to DoP Remi Adefarasin – he makes it all look like the fairy tale it so nearly is.

Rating: 8/10 – amiable and smart enough to overcome the necessity of its downbeat ending, Me Before You is entertaining, and full of light, lovely touches that should bring a smile to lovers of this type of movie; Clarke and Claflin are well-cast, and there’s good support from veterans McTeer and Dance, but it’s Moyes who earns the plaudits by retaining the structure and difficult denouement of her novel.