On 18 February 1952, the SS Pendleton, sailing from New Orleans to Boston, was one of two ships caught in a severe storm; both broke in two off the coast of Cape Cod, Massachusetts. The other unfortunate ship was the SS Fort Mercer. With thirty-three crew members aboard the still floating stern of the ship, the Coast Guard despatched a motor boat from nearby Chatham, though with only four crew on board. In rough seas and with no guarantee they would reach the ailing ship in time, the motor boat reached the Pendleton and was able to rescue all but one of the remaining crew. The rescue was widely regarded as one of the most daring rescues in the history of the United States Coast Guard. In 2009, the rescue was the subject of a book, The Finest Hours: The True Story of the U.S. Coast Guard’s Most Daring Sea Rescue by Michael J. Tougias and Casey Sherman.

If the brief account given above seems to indicate that The Finest Hours will be a gripping, edge-of-the-seat recounting of the that daring rescue mission, then potential viewers be warned: the movie doesn’t reach that level of excitement at any point in its running time. Instead the movie elects to be a very pedestrian retelling of the events on that fateful day, and initially, seems more concerned about covering the romance between motor boat skipper Bernie Webber (Pine) and his girlfriend, Miriam Pentinen (Grainger). We get to see how the two meet, and then there’s a protracted sequence where their engagement requires Bernie to speak to his commander, Daniel Cluff (Bana), for permission to wed (it’s a formality but Bernie treats it as if he’s asking Cluff  for something major).

In the midst of Bernie’s dithering, the SS Fort Mercer‘s plight is reported, but other coast guard stations are already dealing with it. It’s only when the Pendleton’s equal predicament comes to light that Bernie actually stops being a bit of a doormat and chooses to go out to the stricken vessel. Most everyone sees it as a reckless, even suicidal mission, and Bernie is joined by just two of his colleagues, Richard Livesey (Foster) and Andy Fitzgerald (Gallner), and by a seaman, Ervin Maske (Magaro), who just happens to be there when the Pendleton‘s plight is discovered. Each man knows that there’s a good chance they won’t make it to the ship, or even come back, but as Bernie says, “They say you gotta go out. They don’t say you gotta come back”. And with that reassuring quote, the four men take a motor boat out into heavy seas and fight their way over a stretch of treacherous water called the Bar. And from there, and without a compass to guide them, they attempt to find the Pendleton.

Even now it all seems highly dramatic, the kind of heroic true story that proves inspiring, and makes the viewer want to be a part of that rescue mission if it were at all possible. But the movie founders from this point on, and while the crew of the Pendleton, ostensibly led by engineer Ray Sybert (Affleck), struggle to keep the stern afloat until help arrives, Bernie and his crew are faced with a seemingly number of violent swells to overcome, and all of which are bested by Bernie – basically – accelerating over or through them. This repetition proves wearing, and robs the movie of any tension, because no matter how big the approaching waves are, Bernie just floors it, and any sense of peril is quickly and completely dismissed. 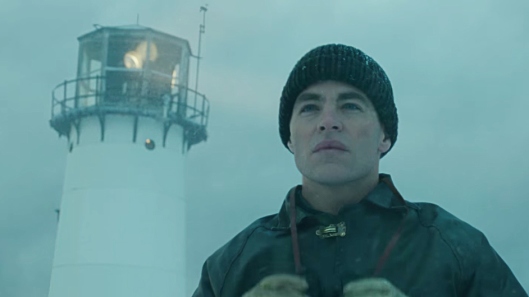 Meanwhile, Sybert has to contend with semi-mutinous crew member D.A. Brown (Raymond-James) and his insistence that they get off the Pendleton by using the lifeboats. In one of the movie’s better scenes, Sybert shows everyone why that isn’t such a good idea, but otherwise any tension is dissipated by Affleck’s restrained performance, and no concrete sense that anyone on the ship is in any real danger (which is disconcerting considering their situation). And this is the movie’s main problem: it doesn’t really know how to make all this frightening or gripping or challenging. Even during the rescue, a sequence which should have ramped up the tension to unbearable levels, the movie fails to capitalise on the situation and keep the viewer on the edge of their seat. Instead the movie acts as a kind of dramatic, clichéd tick box exercise.

The movie also marginalises all its characters with the exception of Miriam. While Bernie and his crew become mere figures on a boat who are focused on the seas ahead, everyone back at Chatham is kept either hanging round the coast guard radio, or eventually, in a risible sequence where the townsfolk gather their cars at the dock with their headlights on to guide poor Bernie home, asked to pull together and be part of the heroic effort themselves. This is partly down to Miriam, who makes an attempt to get the rescue mission called off because Bernie has decided to do the right thing. It’s an incredibly selfish thing to do, but the movie tries to make her look heroic rather than self-serving, and it never recovers from it. And once he is out there, and despite several dozen close ups, Pine’s Bernie could be just about anyone getting buckets of water thrown over them.

The Finest Hours also has an odd visual look about it, one that heightens the artificality of the CGI rendered waves and the Pendleton‘s exterior, particularly when the actual rescue is in progress. It’s at this point that the viewer will be unable to retain a sense of the scope and size of the mission itself, and will be trapped into thinking, “what a small tank they must have used”. And then, with the trip out to the stricken Pendleton having taken so long, the movie rushes the return trip, and the movie ends without ever establishing itself as a thrill-ride or a serious, dramatic tale of heroism on the high seas.

Partly this is due to the structure of the script, which pays too much attention to events playing out on land rather than at sea, and Gillespie’s watered-down direction (pun intended). As a result, the cast make little impact, with only Grainger standing out from the faceless crowd – Foster is one of several cast members who are completely wasted in their roles – and the movie lurches from one unconvincing scene to the next, devoid of any sense of unease, and ending up as stranded as the Pendleton is in the few hours left to it before it sinks completely.

Rating: 5/10 – only occasionally (and even then briefly) powerful, The Finest Hours does scant justice to its true story, and introduces too many fictional elements to make it work effectively; with a bland central performance from Pine, and without a strong-minded director at the helm, the movie disappoints more than it impresses and seems almost wilfully lacklustre.

The Finest Hours is based on a true story, and is set in 1952, when a nor’easter off the New England coast tore two oil tankers – the SS Mercer and the SS Pendleton – in half. The ensuing rescue mission took place in some of the most extreme sea weather ever experienced, and was fraught with danger. The cast includes Casey Affleck, Chris Pine, Eric Bana, Ben Foster, and fresh from The Riot Club (2014), Holliday Grainger, and the cinematographer is Javier Aguirresarobe, whose work on movies such as The Road (2009), A Better Life (2011) and Blue Jasmine (2013), is a strong indication that this may well be one of the most strikingly shot dramas of 2016. But what is clear from the trailer is that this is one movie that might just eclipse The Perfect Storm (2000) for storm-drenched action.