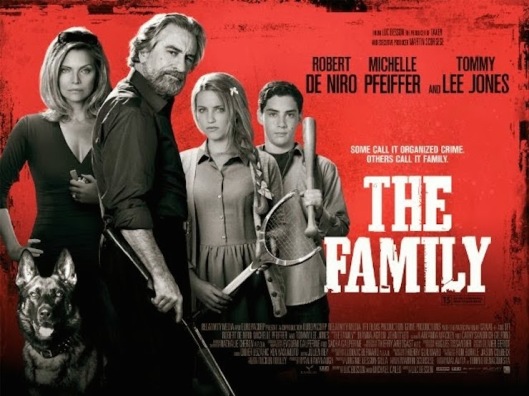 Having ratted on his bosses in the Mob, Giovanni Manzoni (De Niro) and his family – wife Maggie (Pfeiffer), daughter Belle (Agron) and son Warren (D’Leo) – are living in France under the Witness Protection Program.  Following an incident at their placement on the Riviera, the Manzonis are moved to a quiet Normandy town where their handler, CIA agent Robert Stansfield (Jones), hopes they’ll settle down and stay out of trouble. While the Manzonis (now the Blakes) try to fit in, a hitman (Freda) is trying to track them down.

Each member of the family does their best to adapt to their new surroundings but with varied results.  Giovanni begins writing his memoirs, Maggie takes an interest in a nearby church, Belle fends off the advances of the local teenage boys and falls in love with a mature student, while Warren takes over the various rackets at their school.  They all encounter problems along the way, and each deals with these problems in their own way: Giovanni with violence, Belle with violence, Warren with violence, and Maggie with violence but then followed by her making confession.  It’s their inability to fit in without reverting to their Mob ways that causes Stansfield to threaten them with yet another relocation, especially after he reads Giovanni’s memoirs and realises how dangerous they could be if anyone outside the family were to read them.  But then the hitman and his gang find them, and everyone has to pull together to keep the Manzonis alive. 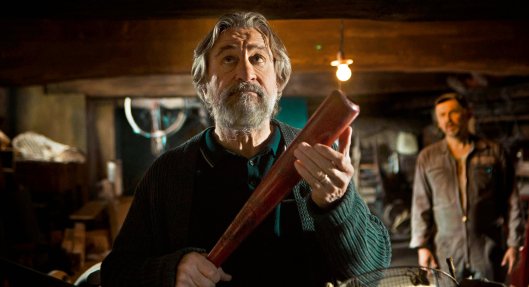 Ostensibly a comedy, The Family is ultimately a bit of a mixed bag.  Besson, directing from a script co-written with Michael Caleo, adds drama, romance, action, a lot of casual violence, a wonderful moment for De Niro at a film screening, and a soupçon of domestic troubles.  The main characters are well-drawn: Giovanni is both naturally aggressive and yet also quite melancholy and thoughtful, while Maggie appears lonely and struggling to adjust; she’s a mother whose role is no longer as clearly defined as it was back in New York.  Belle is sophisticated and yet naïve at the same time: she misunderstands the situation with the mature student, and takes too much for granted.  And Warren finds he’s not quite the clever gangster he thought he was.  All four actors are on top form, De Niro providing a world-weary performance that belies the uncompromising mobster he’ll always be at heart; he’s a joy to watch.  Pfeiffer revisits her character from Married to the Mob (1987), and gives a shaded turn where her unhappiness at her family’s situation is offset by her obvious pride and love for them.  As the children, Agron (from TV’s Glee) is confident, poised and vulnerable, and D’Leo plays Warren with an equal confidence that is impressive for his age.

What spoils the movie though is the continuing shifts in tone.  Beginning with a hit on a family (and providing Freda with a great entrance) that is horribly violent, the movie shifts uneasily between moments of light humour – there are no really laugh-out-loud moments in the movie – and more and more extreme bouts of violence: Belle taking a tennis racket to a teenage boy’s face, Giovanni fantasising about pushing a man’s face onto a barbecue grill.  These episodes, meant to remind the audience perhaps that these people, after all, were part of the Mob and have done some horrible things in the past, serve only to show that, Giovanni’s writing aside, the experience of being in the Witness Protection Program hasn’t changed them at all; if anything, they are using their unique skill-sets to dominate their community just as they used to do.  It’s this lack of personal improvement or growth that undermines the characters and makes them appear close to stereotypes.  There’s also an unpleasant whiff of institutionalised racism that runs throughout the movie, with the Manzonis the target of some unvarnished cultural attacks (“they eat hamburgers morning, noon and night”); the family’s only response is to have a barbecue for their neighbours where they serve only American food, and of course, the French all go away very happy.

The movie also isn’t quite as funny as it thinks it is, and shifts in tone aside, fails to hit the mark too often.  It’s largely predictable and while this isn’t necessarily a bad thing with this type of movie, with the cast involved you’d hope for something a little richer, and with more surprises.  The final shootout is well-staged and shows Besson is still more than adept at shooting action scenes.  The preceding set-up is equally well-staged and quite gripping.  If only the previous hour and a half had been the same.  That said, Thierry Arbogast’s photography is deceptively fluid and gives certain scenes an almost painterly finish, and the score by Sacha and Evgueni Galperine subtly enhances things throughout.

Rating: 6/10 – only fitfully entertaining, and saved by strong performances; The Family won’t change your life, but then it hasn’t changed theirs either.