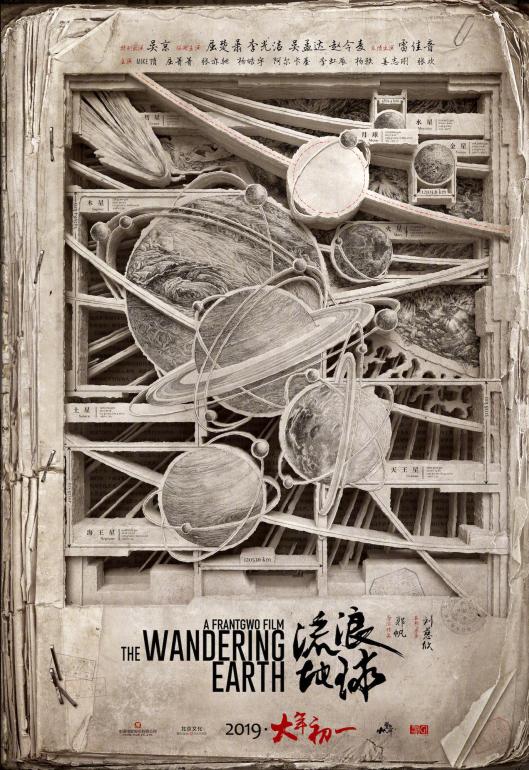 In the future, the sun has become a threat to Earth, on the verge of becoming a red giant. All of Earth’s nations have combined to form the United Earth Government (UEG), and in an effort to save the planet, the UEG has devised a plan to use thousands upon thousands of fusion powered thrusters to push the Earth out of its orbit and away from the Sun, with the intention of reaching the Alpha Centauri star system. Planning to use Jupiter’s gravity as a way to sling shot the Earth out of the solar system, an unexpected spike in Jupiter’s gravitational pull causes Earth to be drawn onto a collision course with it. With the future of the planet, and mankind, seemingly doomed, it’s down to a group of disparate individuals, including cocky astronaut’s son, Liu Qi (Qu Chuxiao) and his adopted sister, Han Duoduo (Zhao), to come up with a way of averting disaster that will restore Earth to its original course, and see them reunited with their father, Liu Peiqiang (Wu), who is based on the space station that is overseeing Earth’s journey…

Some facts about The Wandering Earth: it is China’s second highest grossing movie of all time; it’s already one of the top twenty highest grossing science fiction movies of all time; and right now it’s 2019’s highest grossing movie at the international box office, pulling in over $692 million. Based on the novella of the same name by Locus and Hugo award-winning author Liu Cixin, it’s an absolutely bonkers, over the top sci-fi movie that borrows freely from a host of other sci-fi movies, and never once lets its story get in the way of an(other) overblown special effects sequence. It’s a riot of destruction that soon becomes tedious, but it’s also fascinating to watch, just to see Chinese movie makers competing with Hollywood in terms of Armageddon (1998)/The Day After Tomorrow (2004) -style thrills and spills. As the stakes are raised every ten minutes or so, and seemingly insurmountable obstacles are routinely overcome, Gwo’s movie (which deviates from Liu’s original story, and is the work of eight(!) screenwriters) becomes as much a test of endurance for the characters as it is for the audience. It’s an exhausting exercise in extreme crisis management that batters the viewer more than it impresses, and which, thanks to a lack of character development across the board, makes it hard for anyone watching this to relate to anyone when Liu Qi et al spend most of their time dodging falling masonry.

And no matter how many scientific advisors were on board to guide Gwo and his production team, the narrative, sadly, makes no sense whatsoever. Whatever the merits of Liu’s original novella, it’s unlikely he could have written anything quite so unexpectedly daft as this, with Earth trailing across the heavens like an eyeball shot out of its socket, and a massive, revolving, circular space station that can be driven as easily as a Nissan Micra. It’s not much better on Earth, with surface temperatures in the minus eighties, but still we’ve managed to build an infrastructure across half the globe that appears to be better maintained and run than anything we have now… and that’s without the underground cities… To be fair, Gwo is focused on sci-fi as spectacle, and on that level he’s succeeded admirably, alongside production designer Gao Ang and DoP Michael Liu, who help make Earth’s misfortune that much more credible, even though it’s entirely incredible. But again, this is a romp, albeit a serious one with the usual comic overtones so beloved of Chinese movie makers, but a romp nevertheless, and one that perhaps knows how absurd it all is but which just doesn’t care enough to change its approach or attitude. The performances and direction never aspire to being anything more than perfunctory, and the dialogue ranges from ridiculous to specious (and sometimes in the same sentence), but over all this just goes to show that China is just as capable of making a hollow special effects-laden sci-fi thriller as dear old Hollywood is.

Rating: 5/10 – though it is visually impressive (if more than a little repetitive), and chock full of cliffhanger moments to keep the viewer interested (and fitfully entertained), the sad truth is that The Wandering Earth is not as accomplished as its financial success would seem to indicate; with too many familiar sci-fi elements on display (and not always used to good effect), this is a popcorn movie best seen on the biggest screen possible and with as few expectations as possible.