In 1962, in New York City, club bouncer Tony Villalonga (Mortensen) (known as Tony Lip) finds himself temporarily out of work. Though a number of opportunities are open to him, he becomes intrigued when he’s approached through a friend to be a driver for a doctor on a trip down south. At the interview, Tony meets Dr Don Shirley (Ali), and is surprised to learn that Don isn’t a medical doctor, but a doctor of music (amongst other things). The trip down south is a two-month concert tour that will eventually head into the Deep South, and Don needs someone who can keep him out of trouble during the tour. The two men agree terms, and aim to be back in New York City on Xmas Eve. Setting out, their differences in attitude causes friction between them: Tony is uncultured and lacking in certain social graces, while Don is refined and sophisticated. As the trip continues however, Tony and Don begin to develop a mutual respect and understanding, at the same time as the Deep South’s racist agenda begins to threaten the tour’s completion… 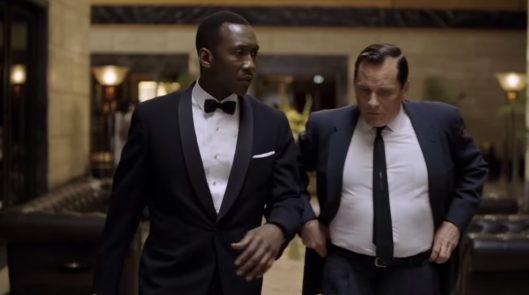 If you were black in the early Sixties, and wanted to travel in relative safety through the South, then a good investment would have been a copy of The Negro Motorist Green Book by Victor Hugo Green, a book which listed hotels and restaurants that would accept black people. Tony is given a copy at the start of the tour, and though he has own racist tics, he’s bemused by the idea of such a book. He’s an Italian-American who’s lived his whole life in New York City; his interaction with the kind of institutional racism practiced in the South has been next to zero. For Don, it’s the very fact that this kind of racism is prevalent that he carries out these tours; it’s about not taking the easy option and staying in the North and (literally) playing it safe. But while Green Book has a clearly defined backdrop that encompasses contemporary racism and the social politics of the period, it’s not specifically about those issues. Instead it’s about the blossoming friendship between two men from two very different cultural and social backgrounds who find a common ground through their experiences travelling together. Each learns from the other, and each is a better man for it. 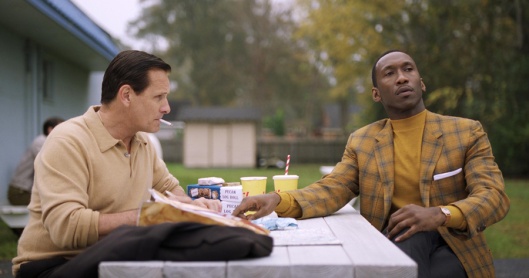 Now, so far it’s another standard tale of friendship achieved between polar opposites, but it’s played out in such a way that both men are made better versions of themselves and without the need for either of them to lose or change any aspect of their character or personality. Instead, they improve themselves, and willingly, seeing their own lives through the ideas and thoughts of each other. This approach takes place over time, and the script – co-written by Villalonga’s real-life son, Nick (who also has a role as one of Tony’s relatives), Farrelly, and Brian Hayes Currie – doesn’t rush things out of any sense of dramatic necessity, relying instead on the subtleties and nuances on the page, and two magnificent performances from Mortensen and Ali. Both actors are on superb form, teasing out small but important revelations about their characters, and relishing the opportunity to work with such strong material. Farrelly, whose output in this decade has been less than compelling – The Three Stooges (2012), anyone? – here hits a home run, getting it tonally and thematically right, and without recourse to unnecessary melodramatics or forced sentimentality. There’s humour amidst the drama, of course (“I knew you had a gun”), but again Farrelly balances it all with skill and intelligence. This is the kind of road trip that you’ll want to go on on a second and maybe a third time, and if you do, you’ll still be as entertained as you were on the first.

Rating: 9/10 – at times, Green Book appears effortless in its attempts to tell a simple story without the need for artifice or contrivance, and it’s this simplicity of style and content – along with a generous helping of cinematic heart and soul – that makes it such a wonderful experience; again, this isn’t about the time period or the geographical area it’s set in, or any combination of the two, it’s about two men with different outlooks and predispositions who become lifelong friends in the unlikeliest of circumstances, and against some pretty long odds.